This chart describes the evolution and varying configurations for airbag systems. The descriptions apply in general

to all the different makes including: Autoliv, TRW, Breed, Allied and Siemens. Car makers use these systems in

differing set-ups. The following images will help us understand the possible configuration set-ups.

FIRST TYPE OF CONFIGURATION: This diagram shows the simplest version that consists of just one ECU that

manages the complex activities of detecting a crash and activating the explosive charges to inflate two airbags.

For the sake of simplicity, connections are shown as one only. In practice, connections consist of more than one 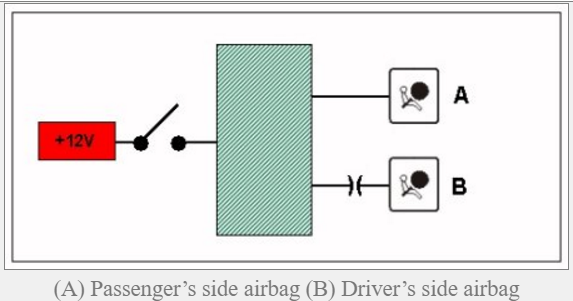 SECOND TYPE OF CONFIGURATION: this diagram shows the version that features not just a steering wheel

airbag but also seat belt pre-tensioners. One is dedicated to the driver's side while the other is for the passenger.

Note that the ECU governing the driver's side airbag is fitted inside the steering wheel.

THIRD TYPE OF CONFIGURATION: This diagram describes a variation of the previous version. There is the same

number of airbags but ECU management configuration is different. Each airbag is governed by an individual ECU

and, as before, the driver's side ECU is fitted inside the steering wheel.

FOURTH TYPE OF CONFIGURATION: this is a more sophisticated system with four airbags and additional data

being supplied by two satellite side sensors. The passenger's side airbag can be deactivated with a key-operated 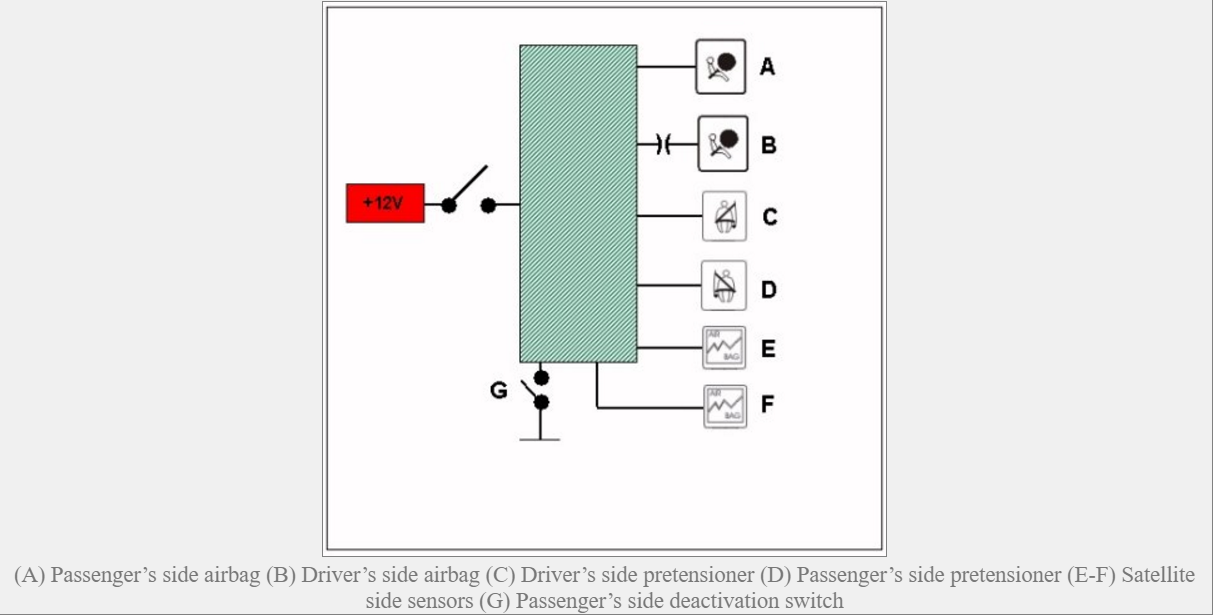 FIFTH TYPE OF CONFIGURATION: Evolution of control systems has led to new safety devices including side and

head airbags. The following diagram shows a system developed around a single ECU that uses all the newest

network technology (CAN network) to share information between systems. 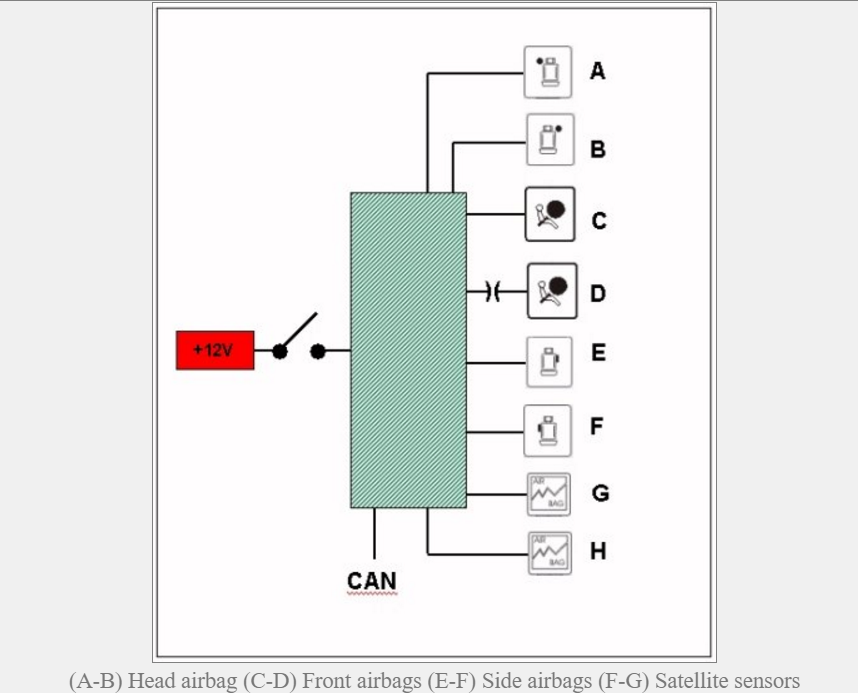 SIXTH TYPE OF CONFIGURATION: Similar to the previous system but with pre-tensioners instead of airbags This

ECU does not use network technology but allows for the deactivation of passenger's side safety systems. 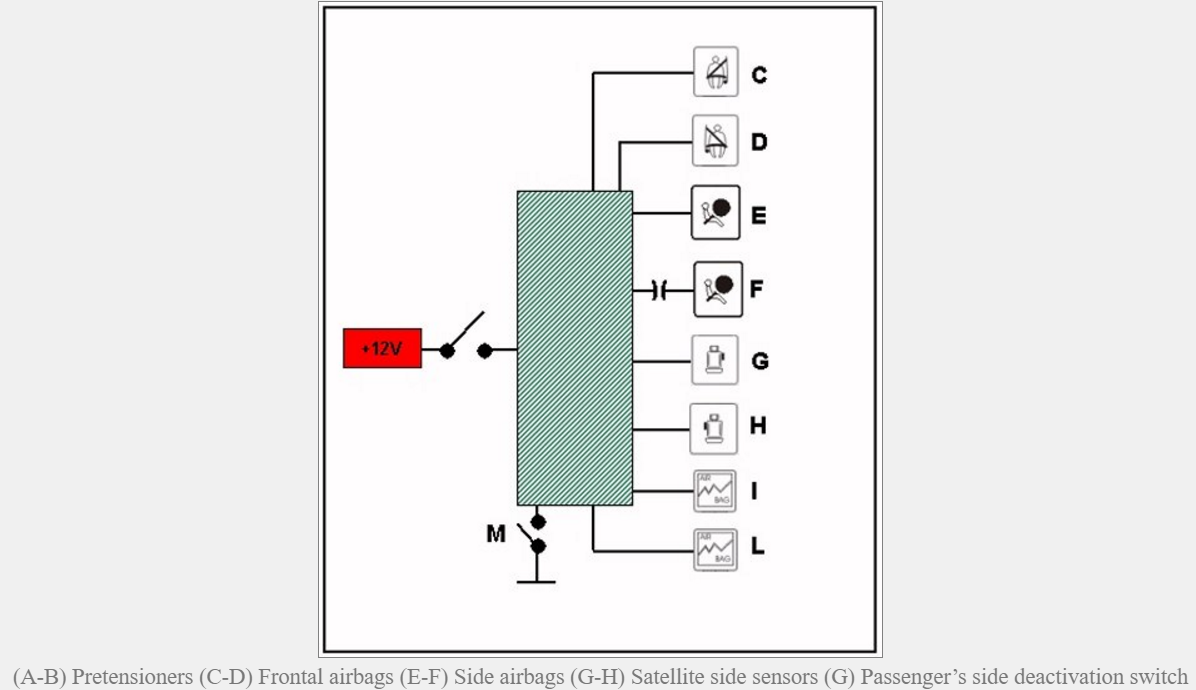 SEVENTH TYPE OF CONFIGURATION: In top-of-the-range vehicles, ECUs manage a substantial number of

airbags. The following example has six airbags and two pre_tensioners. The general layout has been added to by

additional components. One is designed specifically to detect the presence of a passenger (and therefore

automatically deactivate that airbag if no presence is detected). Another deactivates the battery by means of an

explosive charge on the main cut-out switch (power cut off in the event of an accident). 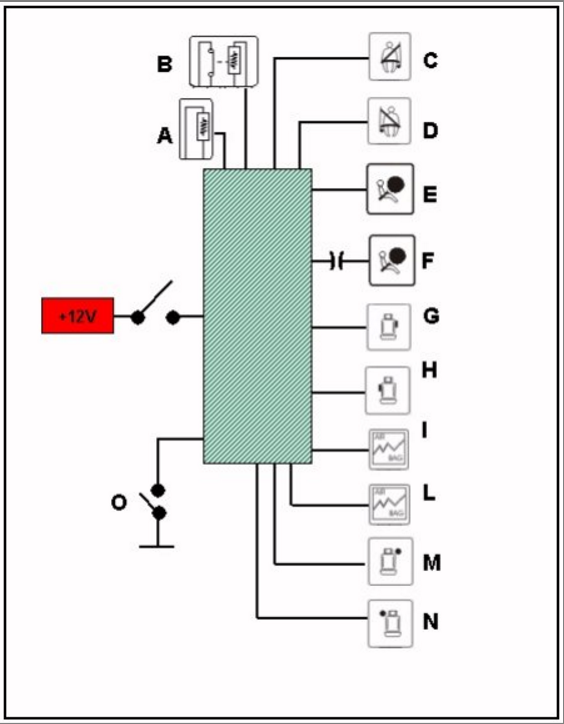