This system was designed to help drivers in difficult situations (sudden obstacles) by compensating for abrupt reactions and by helping to avoid situations in which a vehicle becomes unstable. Obviously ESP cannot defy the laws of physics and let us drive like maniacs. A driver's main task is always that of driving responsibly and paying attention to road and traffic conditions.

During this course, we will show how ESP is based on the tried and trusted ABS anti-lock braking system and how it can adopted on various vehicles along with other systems like ASR, EDS, EBV and MSR. We will also show what other versions can be adopted.

Electronic stability management makes up part of a vehicle's active safety measures. This system applies to safety on the move. In simple terms, it is a system designed to prevent skidding.

The system "understands" when there is a risk of skidding and compensates appropriately.

The advantages offered by ESP are as follows:

• It is not a separate system but is based on other traction systems and therefore shares their characteristics.

• It eases the task of driving.

• The vehicle is always manageable.

• The risk of accident due to sudden driver reaction is decreased.

Speed sensors constantly supply data about the speed of each wheel. The steering angle sensor is the only sensor that provides information to the ECU via the CAN Bus. With the data from these two sensors, the ECU calculates the nominal direction of the steering and normal vehicle behavior. The lateral acceleration sensor communicates any sideways movements to the ECU and the yaw sensor reports tendencies towards

With the data from these two sensors, the ECU calculates actual vehicle conditions. If the nominal and actual readings differ, corrective action is decided upon.

• which wheel to brake or accelerate and to what degree

• whether to reduce engine power

• In automatic transmission vehicles, whether to involve the gearbox ECU.

When the system is intervening to make corrections, the ESP warning light on the instrument panel flashes to inform the driver. 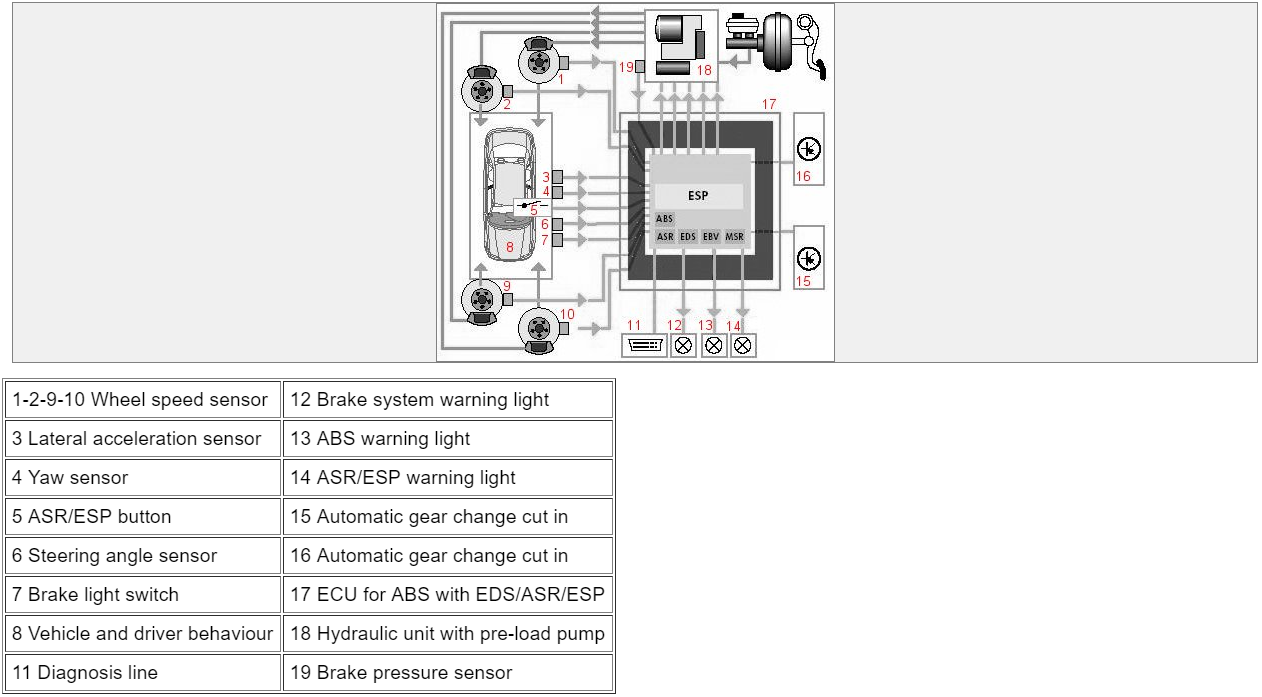 ECU for ABS with EDS/ASR/ESP

The ECU houses a powerful micro-computer. Due to the absolute necessity of protection against errors, the system consists of two calculator modules, a voltage monitoring system and a diagnosis interface.

The two calculator modules use identical software for the processing of data and monitoring each other. This system of running twin components is called active redundancy.

Consequences in the event of malfunction

In the highly unlikely event of a total ECU fa ilure, only the normal braking system remains available to the driver with no ABS, EBS, ASR or ESP.

The failure under self-diagnosis would be under: Faulty ECU - malfunction in power supply